I have just recovered from our last flight which was two weeks ago. And by recovered I mean I just caught up with all the sleep that I lost along the way and got Max to get used to the local time zone, meaning he wakes up at a socially acceptable hour in the morning and goes to bed between 7 and 8 and not at midnight or any other random hour during the night. I completed 3 jouneys on a plane with Max so far (2 of them by myself as my husband only joined us for the last one) and I have to admit, I was scared before traveling with him for the first time. Very scared. I did all the research I could and read other mum’s posts and tips about traveling with a baby. At the end I just decided not to stress about it and go with the flow. What’s the worst that can happen? Well when it comes to air travel there are about hundred things that can go wrong starting with a grumpy and irritable screaming baby inflight and ending with delays, poo explosions and running out out nappies. But these are the things you can’t really control (apart from the nappies) so why stress about them?

I have traveled a lot. And I mean an awful lot. All over the world. In my job I would travel to and from places on a commercial airline at least twice a month. I had my routine and I quite enjoyed getting on an plane I didn’t have to work on, and got to be the passenger for once. I would have my iPad loaded with movies, books, music and magazines to keep me entertained. I would sit down, put my headphones on and mind my own business, quietly working through my emails and enjoying this quiet time when work couldn’t reach me and I got to switch off a bit. I definitely wasn’t the sociable passenger who would want to start up a conversation with the person next to them and the most they would get from me was a polite smile. If I ended up sitting next to a passenger with a baby or in a vicinity of a baby, I would just make sure my earphones were really tight in my ears so I wouldn’t be disturbed if the baby was crying. Well now I was the passenger with the baby! And I knew damn well what everyone else on the plane will be thinking when they see me: aww what a cute baby, please don’t let it sit next to me! But somebody has to be the lucky one.

Our first flight was from Bahrain to Vienna with a connection in Istanbul and it was a night flight. If I thought Max was just going to sleep and be one of the sleepy babies you see strolling through the airport passed out in their parents arms, I was wrong. Max was far too excited about everything happening around him and even though he was tired, he didn’t fall asleep until after the crew have completed the meal service and dimmed the lights which in my opinion took forever. Keeping a baby still on your lap in a constrained space where you have nothing to entertain him with apart from a few toys, is an impossible task. Of course he wants to touch everything that he sees and play with everything that he is not suppose to play with. Of course he wants to empty the entire content of the seat pocket in front of him and smack the tray table with his hand because it makes a loud noise. Of course he wants to touch the stranger sitting next to you because he is wondering who this person is and why is he sitting so close to him. It is absolutely mentally exhausting trying to constantly stop him from what he wants to be doing and catching his little hands mid air trying to avoid him pulling on people’s hair and clothes. When he finally fell asleep after a huge amount of breastfeeding (which executing next to a complete stranger, especially if that stranger is male is just super weird – like my naked nipple is literally only 30 cm away from you) I couldn’t relax anyway. First of all I couldn’t move a great deal because I didn’t want to wake him up so that meant sitting in a very uncomfortable position for a very long time. Night flights are never comfortable anyway (unless you travel in business I suposse, or on a private jet) but having a sleeping baby on you is a new level. I think I got about 10 minutes sleep on that flight.

Next big thing is going to the toilet. First of all I was breastfeeding so I wanted to drink as much water as I could to make sure I would stay hydrated and have enough milk for him. But then the more you drink the more you need to go to the bathroom. Which you can’t if the baby is sleeping on you. If you are lucky and the baby is awake you can go to the bathroom but now what do you do with the baby? You can always ask the crew to look after the baby whilst you pop to the bathroom but if you want to go more than twice during the flight it gets a bit annoying. So you take the baby with you and now the fun starts. I’m not talking about changing the baby in the constrained space of an aircraft toilet where you literally have about 20 square centimetres to manouvre and change the baby. That can be done. But what if you need to use the toilet yourself? I tell you it is nearly an olympic task to squat under the changing table with your baby laying on it. Whoever came up with this design,  what the hell were you thinking? That parents will never travel solo and won’t ever need to use the bathrooom?

This brings me to the next obstacle you will face which is a meal service. You won’t be able to eat. Fact. First of all there isn’t an awful lot of room for your tray table if you have an infant on your lap. Second of all – how are you going to keep your baby from picking everything on your tray and throwing it everywhere or even better, putting it in his mouth? If you are traveling by yourself there is no way you can do this. Unless you are a superhero. And I’m not a superhero. So when the crew approached with the meal service and asked whether I want my meal, I just looked down at Max, smiled and politely declined. I wasn’t polite in my head though where I was questioning the inteligence of the said crew member using very colourful words. Seriously if you are crew member and you see a parent with a child on their lap don’t even bother offering – how do you think we are going to eat it? In my head I was literally apologising to all the passengers I have ever offended like this in my whole flying career. Another disadvantage of a meal service is, if you get stuck in the middle of two carts and your baby needs a nappy change. This was me on our next flight – Istanbul to Vienna. Middle of a breakfast service. Stuck in a window seat. Max has just done an explosive poo. I can smell it and I’m pretty sure the other two passengers currently sitting next to me and eating their breakfast can smell it too. But they politely avoid any eye contact. So me and poor Max sit there for another 30 minutes waiting for them to finish the stupid breakfast service (which I’m not eating) and clear in the bloody tray tables so we can get out. What else can I do?

I do have to say there was a great amount of helpful people along the way who offered me help. They would help with the bag and with folding the pram, with holding Max so I could fold the pram and unfold the pram and with letting us through the doorways and aisles. One possible advantage of traveling with a baby is that you get priority boarding and also priority when you go through security which I’m not sure does count as an advantage given the fact that you have to take your baby out of the stroller, give him to somebody to hold him, fold the stroller, put the stroller on the x-ray machine to then realise it won’t fit so you unfold the stroller again and put your baby in it. Try this without sweating like you are running a marathon.

On our next flight we had my husband with us and it  made a big  difference. I even got to eat a meal during meal service and went to the toilet when I needed to. In retrospect though, it is not that bad traveling with a baby. As long as you are prepared and pack well. And also mentally prepare yourself that you won’t arrive refreshed and rested to your destination as the chances are you won’t get a wink of sleep. And you will probably not even have time to freshen up after you land because you will be busy changing nappies and poopy outfits for your baby. And Max really was a very chilled baby, he didn’t cry or throw a tantrum the entire journey and did incredibly well for a 6 months old baby (which is how old he was on his first flight).I’m sure there will be lots of flights for me and Max coming up soon so I will let you know how it all goes. It might get better. When he is about 2 years old and gets to have his own seat.

Tips for traveling with a baby:

What I packed in my carry on

This is the carry on that I used for my travels. It’s a backpack and can fit all of the above things whilst keeping me handsfree. I got it off Amazon and there are tons of these with a very similar design and price. 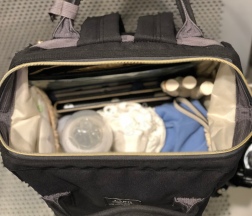 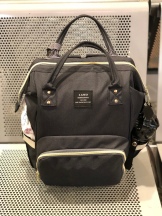